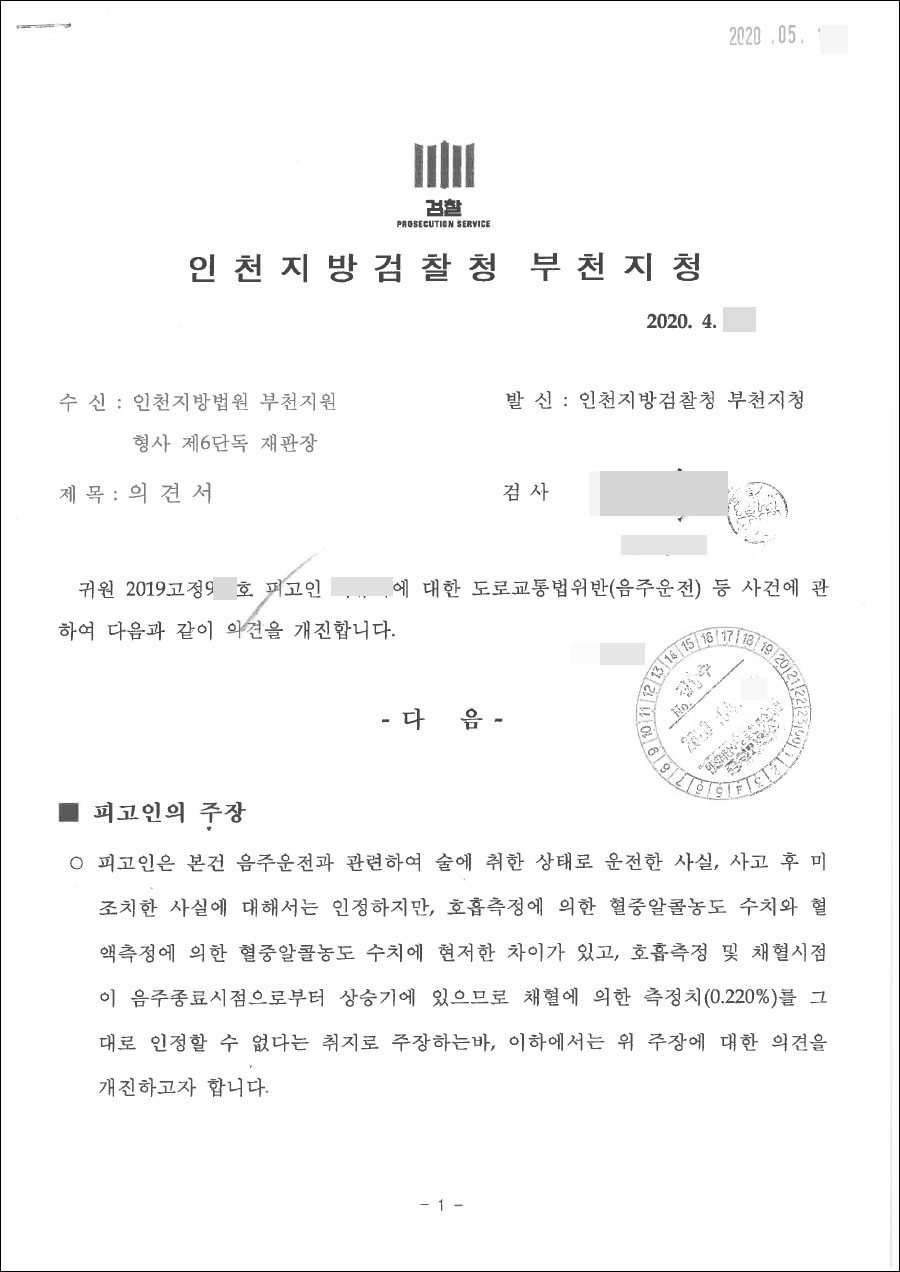 Indictment was brought against the client for driving about 500 meters on a roadside while intoxicated with a blood alcohol content of 0.22%. The client was a foreigner, but he lived in Korea for a long time with his parents, worked for a famous Korean company, and was about to get married. Meanwhile, if a foreigner is sentenced to a fine of 3 million won or more, he/she will be ordered to deport in accordance with the Immigration Control Regulations and will be at risk of being deported from Korea.

Article 44 of the Road Traffic Act (prohibition of driving while intoxicated) prohibits anyone from driving a vehicle while intoxicated. If anyone violates this and drives under the influence, he/she will be subject to different penalties depending on blood alcohol level according to Article 148-2 (Penalty Provisions) of the same Act.

△ When the blood alcohol level is 0.2% or higher,

: Imprisonment from 1 year up to 2 years or a fine from 5 million won up to 10 million won

: Imprisonment up to 1 year or a fine up to 5 million won

According to the indictment, however, the client's blood alcohol level at the time was 0.220% (measured by blood sampling), which was subject to Article 148-2 (3), of the Road Traffic Act, which was the most severe punishment for drunk driving, and the lower limit of the fine was 10 million won, and the prosecutor also applied for a summary order of 10 million won in fine in consideration of such a statutory sentence. At this rate, deportation was so obvious, therefore the client requested a formal trial, and our defense counsel had to come up with a way to somehow reduce the blood alcohol level to less than 0.2%.

Our defense counsel carefully reviewed the evidence record and related precedents, and the concentration deviation between 0.118% in respiratory measurement and 0.220% in blood sampling was significant, and 83 minutes had elapsed from the end of drinking to the time of blood sampling, pointing out that it is problematic to recognize the blood sampling measurement of 0.220% as the blood alcohol level at the time of driving. In addition, our counsel emphasized the pitiful circumstances faced by the client as a foreigner and insisted on extenuating circumstances or the reasons for sentencing so that the client would be given the maximum leniency not to be deported from the country.

With the help of our defense counsel, the prosecution changed the applicable law to the indictment from Article 148-2 (3) 1 of the Road Traffic Act to subparagraph 2 of the same paragraph.

In the case of the client, there was no possibility of receiving a punishment exceeding the fine because he had no criminal history related to drunk driving, but the amount of the fine was the most important situation due to his alien status. It seems that the client was intoxicated at the time he was caught and it seems impossible to make a normal judgment, but the respiration measurement result of 0.118% was excessive, he thought, thus he requested for blood sampling which came out as 0.220%, making situation even more unfavorable for the client.

Like the client, most people who have been arrested for drinking do not accept the results of respiratory measurements and request blood sampling, however depending on how much time has passed since you drank alcohol, but most blood sampling measurement comes out higher than breath measurements, but people make this mistake without knowing it. Drunk driving is a crime that should never be committed, but if you are caught under sobriety check, you must be careful not to make the same mistake and be punished for more than the wrong you committed.