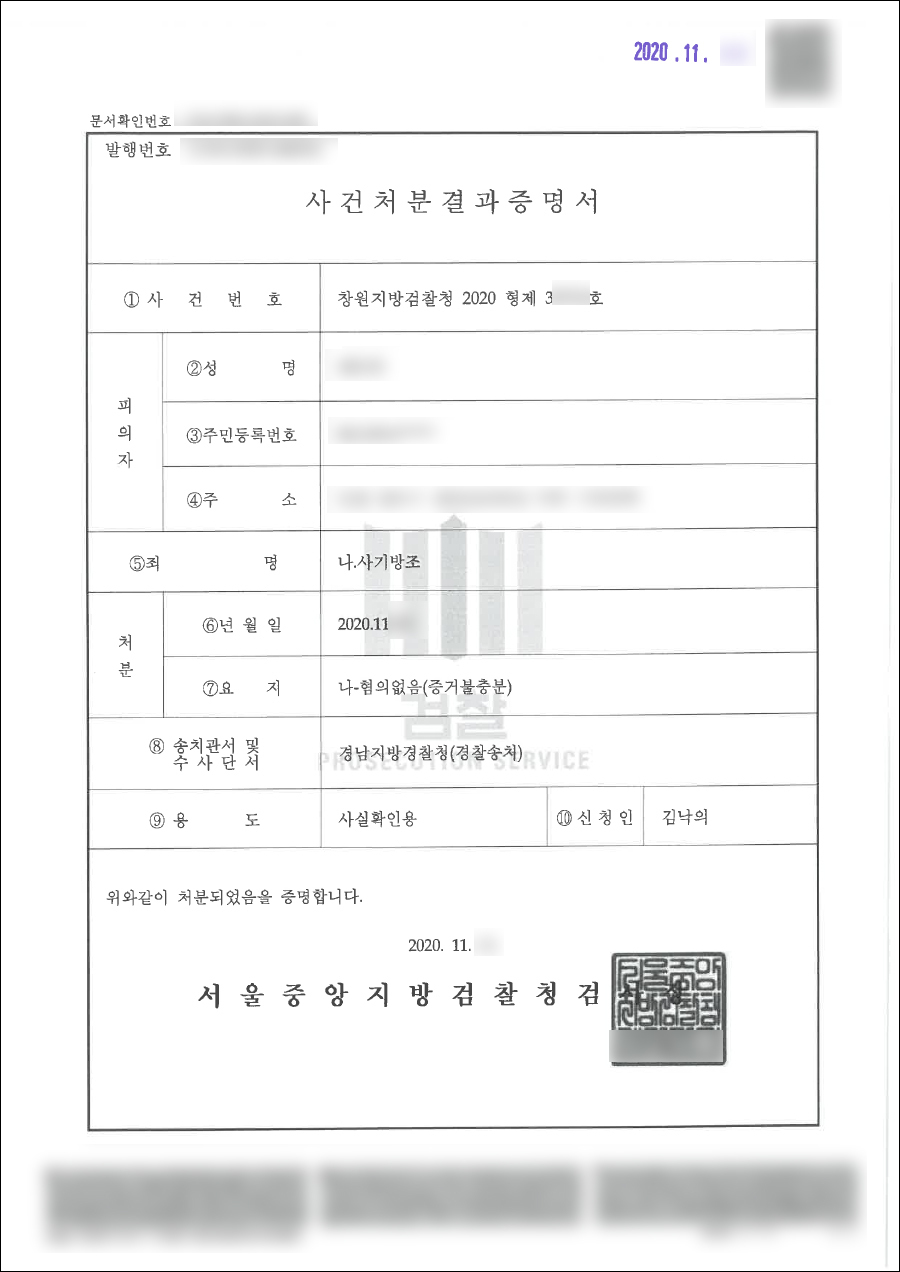 The client is a Vietnamese national residing in Korea, raising children alone in Korea, while her husband still lives in Vietnam. The client received a total of KRW 58.5 million, including the victim's KRW 15 million, in relation to currency exchange from her husband in Vietnam, and then remitted the money to a total of 9 accounts designated by her husband in Vietnam although she could suspect that it could have been voice phishing crimes rather than normal transaction method, wherein she was reported to the investigative agency on charges of facilitating fraud and aiding and abetting the fraud of unnamed people.

However, the client has been a sincere alien living in Korea for 12 years with 2 daughters. The client said that her husband in Vietnam runs a store selling Korean goods and he was doing so-called ‘Hwanchigi transaction,’ that is, an alternative remittance method of currency exchange, and she only remitted the money received in relation to ‘Hwanchigi’ to the account designated by her husband without having any idea if the money was voice phishing-related damage.

As a foreigner who has lived in Korea for a long time and raised her children alone, the client strongly denied the allegations and came to Law-win for help, as she could face extreme situation in which she could be deported to Vietnam if convicted of participating in the crime and punished. Since then, the investigation has been conducted for about a year, and she communicated through a Vietnamese interpreter of Law-win and understood the whole story of the incident, and attended the investigation conducted at the Gyeongnam District Prosecutors' Office.

Investigators did not readily believe the client's words in the beginning, but they finally began to believe her words when she submitted translations of text messages that her husband exchanged with others in Vietnam in relation to currency exchange, and a ‘Criminal Complaint Receipt’ in which her husband was also reported to have been a victim of fraud in Vietnam. In the beginning, the client seemed to cover up some facts due to the fear of punishment for ‘Hwanchigi’ rather than participation in voice phishing, but after close counsel of Law-win’s attorneys, she finally laid out all the facts in detail leading to the clues to the solution.

With the help of Law-win’s lawyers, the client has been cleared of charges (insufficient evidence) of aiding and abetting fraud.

Because the client was a foreigner, she did not know the Korean judicial system at all, and lacked the ability to understand the issues of the case and to select evidence material. Fortunately, Law-win had a Vietnamese interpreter, enabling our lawyers to communicate with the client flawlessly, which led to trust and confidence in our lawyers, helping our client to faithfully prepare and bring in data requested by our lawyers, which led to the clearing of all charges after a long-running investigation.